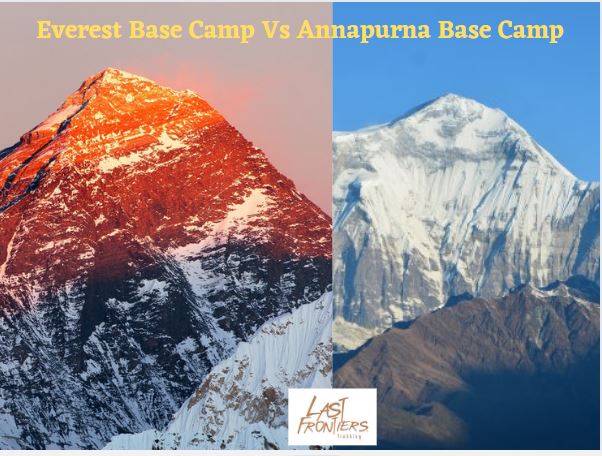 Nepal is a magnificent place that covers more than 30% of the world’s mountain ranges and has many traveling and climbing trails in the Himalayan region. Among them, Annapurna Base camp and Everest base camp are two of the most trekked trail in the Himalayas. There are many variables that decide when contrasting Everest base camp trek versus Annapurna base camp trek such as accessibility, atmospheric condition, natural scenery, a season that you are voyaging, and so on.

It’s the decision each enthusiastic traveler faces in the long run: Annapurna or Everest Base Camp? Most travelers wind up traveling both eventually, but for some only one of these treks is enough to quench the thirst they have for traveling in the Himalayan mountain range.

Introduction: Everest Base Camp trek is renowned overall for its amazing perspectives on snow-capped mountains and its incredible path. On this trek, you’ll both climb and hike through deep rivers and forests, woodlands, and ascend high ridges. This famous trip takes you to the well-known town of Namche “door to the Khumbu”. From here, you’ll stroll through various old religious communities. You will likewise experience the Sherpa way of living and will be given a chance to participate in their culture.

On the EBC trail, you will see beautifully built Buddhist Monasteries, Cloisters as well a countless number of payer flags. You’ll likewise visit Sagarmatha National Park, home to the rarest flora and fauna. You’ll, at last, arrive at Everest Base Camp all the way through the well-known Sherpa towns of Namche Bazaar, Tengboche, Dingboche, Lobuche, and Gorakshep.

Scenery: Everest Base Camp draws in loads of travelers through its breathtaking view. You will get to see different stunning glaciers, historical monasteries and cloisters, and the heartwarming traditions and customs of the Sherpa people who reside there.

You are literally surrounded by mountains from each and every direction once you are close to base camp. The incredible mountains are simply above you and their

excellence blows your mind. Everest Base Camp takes you to the foundation of the world’s most noteworthy mountain. The best perspectives on Mt. Everest are seen from Kalapathar, one of the vantage points of this trip. Tengboche Monastery is the biggest cloister in the Khumbu area. This is an authentic Buddhist Monastery and an incredible spot to visit. From here, you can get a dazzling perspective on mountain tops including Mount Everest, Nuptse, and Lhotse.

Community: The Everest area is home to the Sherpa community. They are renowned overall as they are extraordinarily great at elevations. Whenever you are on your EBC journey, you will experience the extraordinary culture of the Sherpa people.

Introduction: Annapurna Base Camp trek is one of the most well-known and best treks in the Annapurna district. The Annapurna Circuit is a trek found in the mountain range of Gandaki province of Nepal. The all-out length of the trek fluctuates between 160-230 km. This trek crosses two distinct waterway valleys and surrounds the Annapurna Massif.

The trek arrives at its most elevated point at Thorung La pass (5416m/17769 ft), arriving at the edge of the Tibetan plateau. This staggering trip goes through the different landscapes from marsh towns to lowland villages and offers remarkable views of the gigantic mountains. The most noteworthy rise of this course is Annapurna Base Camp at 4100 m. At this most elevated point, you will be encircled by snow-covered mountains.

Scenery: Annapurna Base Camp trek starts from the lower terrains of the Himalayas. You will travel across the different rice fields, oak, and rhododendron woodlands as you climb. Assuming that you trek Annapurna in spring, the rhododendron trees will be blossoming and they are so beautiful that you can’t take your eyes off of them.

The Annapurna area is a lot wetter than EBC hence, you’ll stroll through additional timberlands and homesteads, which will provide you with a wonderful view of greenery which you’ll never forget. You will get the most notable perspective on Mt. Machhapuchhre and Dhaulagiri which is extremely amazing. At Annapurna Base Camp, you’ll be encircled by the Himalayas from 360 degrees.

Community: In Annapurna Base Camp you’ll see and get to talk with Brahmin and Chhetri people whose primary source of income is farming. You will likewise get to meet people from the Gurung community in Ghandruk. And will get an opportunity to go through a portion of the beautiful towns occupied by Magars and Thakali communities. You’ll investigate both socially rich Buddhism and Hinduism, particularly at lower heights. Hence ABC is also known for its diversity in social communities and religions.

Try not to pick a trek for its easy path. As all sort of trips needs actual planning, even those named simple. Both these climbing offers a wonderful chance to investigate the brilliant Himalayan mountains once in a blue moon. Assuming that you have almost no trekking experience, ABC may be more appropriate for you. The height of the places along the trek is lower and the entire excursion is more modest in terms. Be that as it may, but with proper preparation and arrangement, there is not an obvious explanation for why you can’t take on the EBC journey also. Simply take a gander at the variables referenced above, weigh them in, and conclude which great trip you need to be a part of.